Who am I? What is Martial Moves?

My name is Brad Bode.

Like many of you I started in the Martial Arts at a young age (10 years old). I had a knack for sports, but wouldn't consider 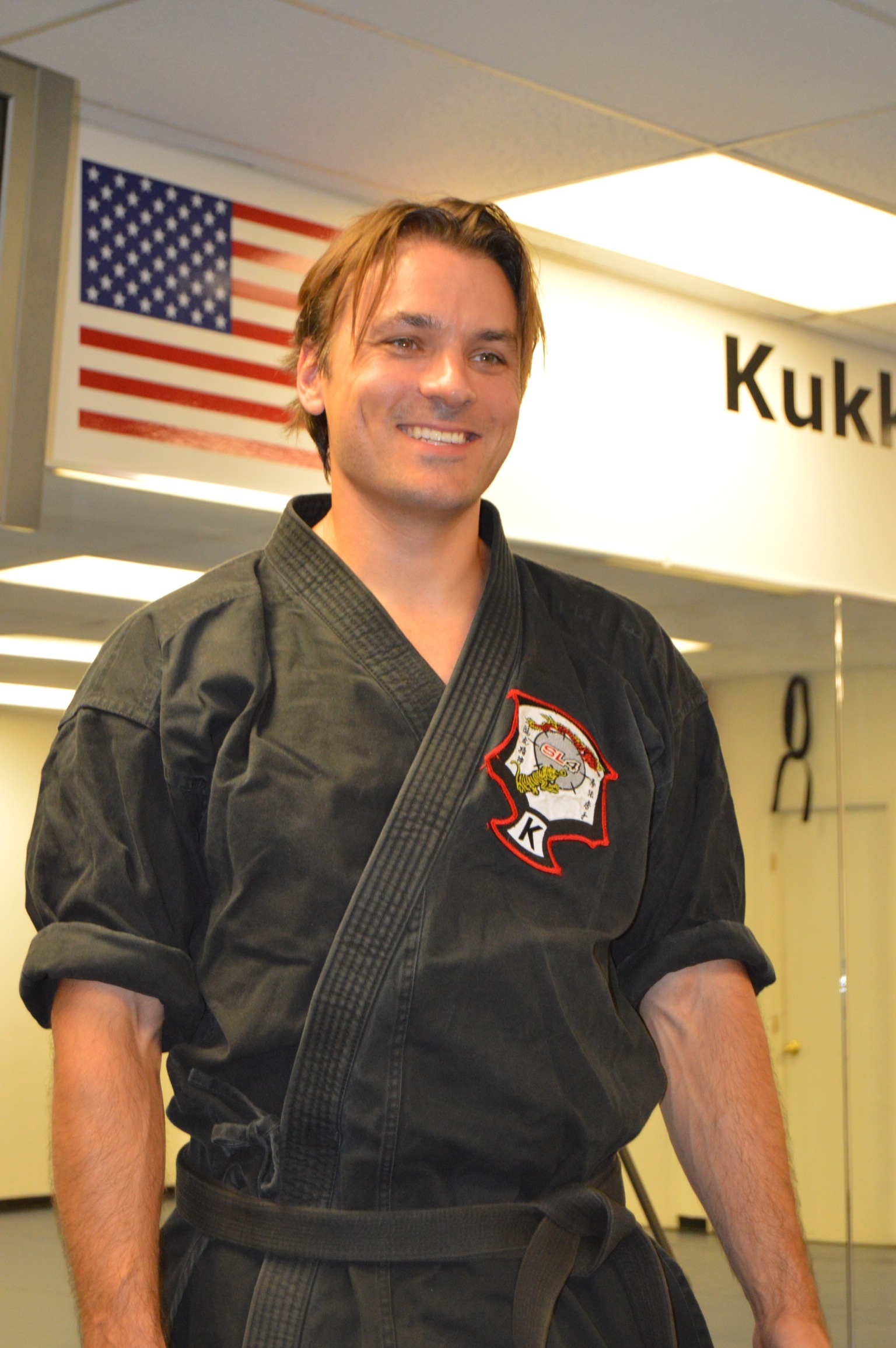 myself gifted by any means. I played hard and worked hard. My earliest memory of the Martial Arts were the Sunday Kung-Fu theatre movies. You know the ones where the mouth moves, but nothing comes out due to horrible dubbing. They were terrible!

But man could they move.

I was enthralled by the power. As a kid it seemed like a fantasy. Kicking, punching, jumping. Taking on 10 guys at once. These guys were amazing! "Mom, I want to take Karate". I think every mom in America has heard those words uttered at 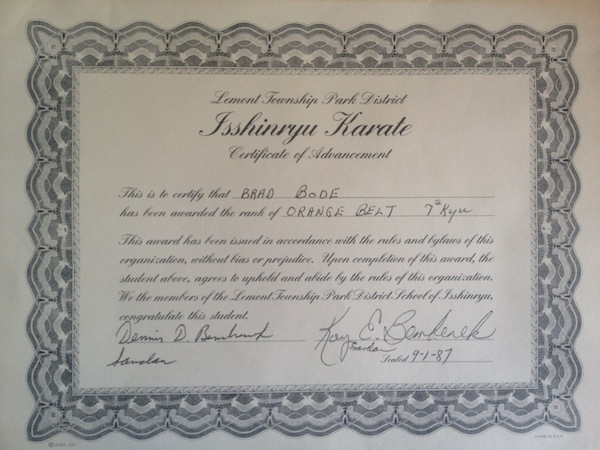 some point. I'm not sure how it all went down, but I must have pestered her enough to let me join the Isshin-Ryu Karate club at the local town recreation center.

It was fun. I stuck around for some time, but really I had no idea what I was doing. Would it work? Did it work? It sure didn't feel like the Kung-Fu movies I grew up watching. As with most kids I grew bored after a year and moved onto Gymnastics. Little did I know that Gymnastics would change my life.

With Gymnastics you have to be precise. You have to point your toes, flex your legs, straighten your arms. All of it had to be done precisely and fluidly. The only way some maneuvers could be done was through proper alignment and focus. Sounds familiar doesn't it?

I spent four years in Gymnastics. It allowed me to mature and control my body better. After competing, winning, and getting taller than the instructor (I was only 13), I opted to move on, but the lessons would last a life time.

But I needed a new challenge

Big sweeping kicks were all the rage with Van Damme on the scene when I stopped doing Gymnastics. Tae Kwon Doe 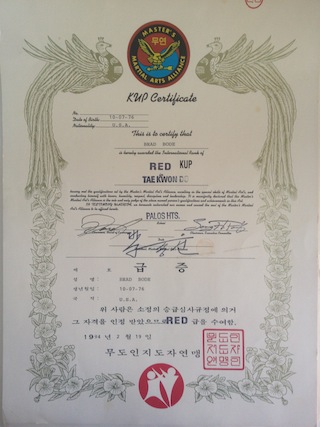 was taking America by storm and I, like so many other kids, jumped on board. The school wasn't too far away and seemed to have quality teachers. I worked hard, moved up in rank quickly, but still, something felt missing. After two years and tons of sparring I still felt like I wasn't learning how to fight. I was learning how to kick high, punch, and maybe a few joint locks here and there, but...

None of it would work

So I got to Red belt and moved on. I met this guy named Mark Thiel who showed me American Kenpo. He impressed the hell out of me and, at the time, it seemed more realistic than TKD. So i started dabbling in it until college took over my life. I didn't return to the Martial Arts for 7 years. During that time I got a Masters degree and moved to California.

Little did I know that Los Angeles was essentially the birthing place for Martial Arts in the United States.

I joined a local Kenpo gym in South California and started trianing. Occasionally this older guy would come in and teach my instructor along with some of the senior students. I was impressed. He moved with authority and power. When he hit me I felt it. When he moved I believed it. And more importanly he had answers for all my questions. And when I say ALL my questions I mean all of them.

He could articulate why certain movements were done. He was so precise when teaching that if a finger was out of place he would correct it.

This reminded me of Gymnasitcs. Everything had to be perfect. And in Gymnastics there was a reason for the perfection. You simple couldn't make it work without being aligned with exceptional form.

For the first time I felt like I was learning to fight.

I immediately started taking lessons with Dr. Ron Chapél, a man who had the sharpest intellect of anyone I had met at the time. Mind you I had already worked along side PhD physicists from Harvard, MIT, and countless other higher institutions. Sure, he wasn't a math guy, but he was brilliant when it came to the most important thing...

He could show me what worked and why. He could explain all the crazy movements I saw in the chop socky flicks from my childhood. I started asking countless questions. So much so that he put a term in the class course material:

BODE – (Bo-Dee) To pester the instructor with endless questions, most of which the answer is already known if the asker would think about it for a moment first, or which have an answer that is completely irrelevant to the issue at hand. See also “eBode.”

I kept learning and training, sometimes 15 hours a week. I pushed myself, paid attention to every detail, and what did I learn?

Doc is and was a Martial Hacker.

What do I mean? I mean he didn't subscribe to tradition. He kept evolving the arts. He read sports physiology books and forced himself to apply modern science to something taught to him long, long ago. He tried something in the streets (as a
cop) and if it didn't work, he threw it out. He used muscle testing to learn how the body broke down in different postures. He poked and prodded nerves to find out where and why certain nerves opened up.

He was and is a hacker. Hackers experiment. They hypothesize, test, and try again, all the while looking for the best results.

I had met met my match. Intellectually he bested me. Physically he hit like a mule. I have stuck with him to this day and can proudly say I have attained rank with Dr. Ron Chapél. 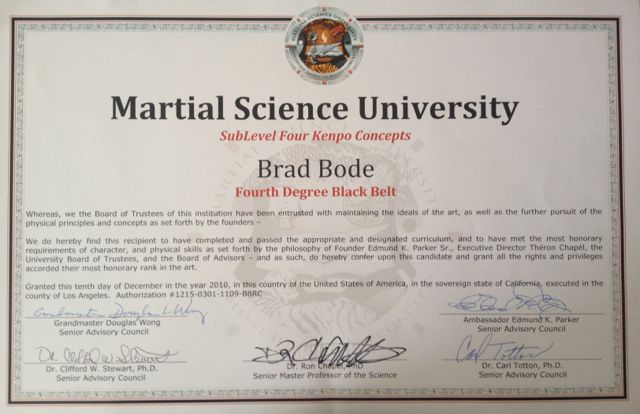 Do you train anywhere else?

Yes. I attend other schools when time permits. However, my home school is, and always will be, with Doc Chapél. I also try to attend as many seminars as possible. Annually I perfer Guru Cliff Stewarts "Camp of the Masters" for variety and real hands on training. Guru Danny Innosanto has some amazing guest instructors at his school as well. If you are in the area I highly recommend both.

Outside of the Martial Arts I have an BA in Film and Video from Columbia College Chicago and a MS in Computer Science Northern Illinois University. I credit my ability to see life from a design / asthetic perspective to my film degree, while my computer science degree trained me to think critically from a systems design perspective (martial arts are in essence system design). I spent a lot of time working in Aerospace and the Defense industry, moved to oil, mining, and structural monitoring, and enjoy poking my head into new technologies as often as possible.

What is Martial Moves About?

It's about how and why.

How do you make a fist?

How do you kick without hurting your hips?

How do you punch harder than anyone else?

It's about hacking the Martial Arts for the best possible outcome and carrying on the tradition of my instructor. Always improve. Always question. Always learn.