Are you attacking right?

No matter the Martial Art, whether sport, self defense, or point sparring, we have one common goal... don't get hit. Seems pretty simple right? That's what I thought when I first started in Karate years ago, but over the years I learned...

We are all attacking wrong.

Don't believe me? Let's start with an example. This clip, from none other than a young Grandmaster Ed Parker, shows a standard "Karate Punch" attack. For the sake of this article we will call this a "step-through punch".

So why is this bad?

Because a step-through punch is unrealistic. No one in the street or ring will attack you this way, yet many schools still use this attack. Is it tradition? Is it lack of knowledge? Who knows.

But it has to stop.

The brain is basically a pattern recognition system. Each time we are attacked in training we are "educating a line of attack" or pattern. If we feed it a line of attack that mis-represents reality we are training for failure!

To borrow from my computer science degree... Garbage in, Garbage out

Regardless of your goals, street, ring, or otherwise, you are doing yourself a disservice if you continue to train this way. But what is a realistic attack? Let's take a closer look. [Warning: Video will contain graphic language and violence]. Here is an example of a series of street style punches. Most of them begin with the power hand and leg to the rear. The punch is initiated with the arm and shoulder whipping forward while the leg stays behind. It's only after the connection of the punch that the leg steps through if it does at all.

But what about sparring competitions or MMA / UFC?

Even the Shotokon Karate guy don't use the step through punch in their form of competition.

So how do I attack realistically? Well for starters...

Thugs want to knock you out with one punch. They want to take your head off so they don't risk a prolonged fight. Thugs are not going to square up, declare a fight, and allow you to prepare. Rather, they will distract with their weak hand or a head movement, then explode with the strong arm from the rear. If you watched the videos above you will see it over and over. Even the best MMA fighters are employing the same tactic. Dan Henderson (in the 3rd video above) steps with his left foot while slightly fainting with his left shoulder then explodes with a haymaker right. Many of the MMA knockout artists employ this brute force thug style approach.

So how do I train properly?

1) Start with a left lead (or right lead in which case you reverse the hands and feet in step 2,3)

2) Step with your left to "sneak" closer to your target. Optionally, depending on your training level, circle the left shoulder or throw a left feint

3) Throw a right punch that leads with the fist. Keep the right foot on the ground as long as you can. Remember, the goal here is to let the weight of the punch pull you forward. Once the punch has completed you will let the leg follow through.

1) Not leading with the fist. People all too often sling their arms wide ala movie style punches. Sure, this could happen in a fight if you are attacked by someone who doesn't know how to punch, but you should be training for someone at a higher skill level. Defending against a flailing slinging arm attack is easy. This video shows the fault perfectly. Note that the attacker is simply spinning his torso and swatting at his target. If he made contact it wouldn't be with the knuckles, but the inside of his fist and likely wouldn't knock anyone out.

2) Not leaving the rear foot on the ground until the last moment. Instead, you should let the momentum of your arm carry your leg through.

Until next time... train hard and stay safe. 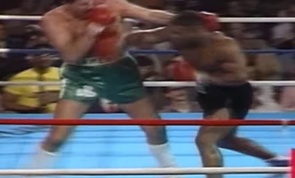 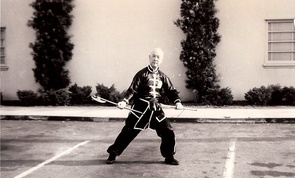 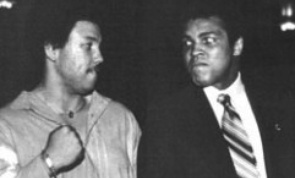